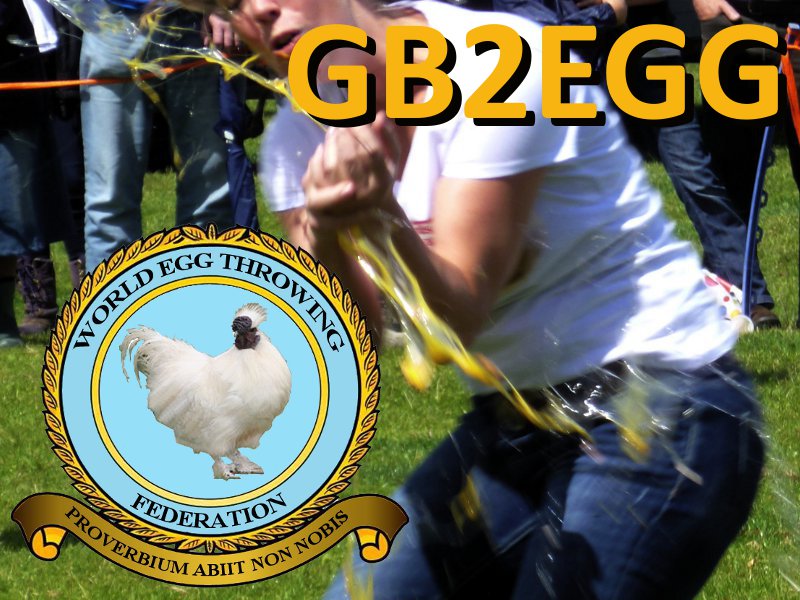 This popular annual show raises money for local, national and international good causes. Egg Throwing is recognised by the English Sports Council and the sport is taken very seriously by some competitors. 300 competitors from around the world took part. 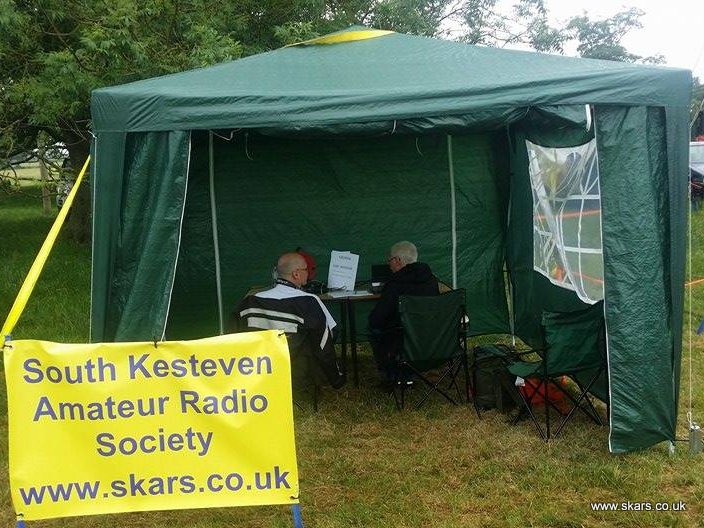 For the most part GB2EGG was operated by Nigel Booth M0CVO, Graham Belson M0HLO and Sean Burton 2E0ENN using a Kenwood TS480 at 100w feeding a M0CVO HW-40HP OCFD both supplied by Nigel on top a 40ft mast supplied by Stewart Mason M0SDM. 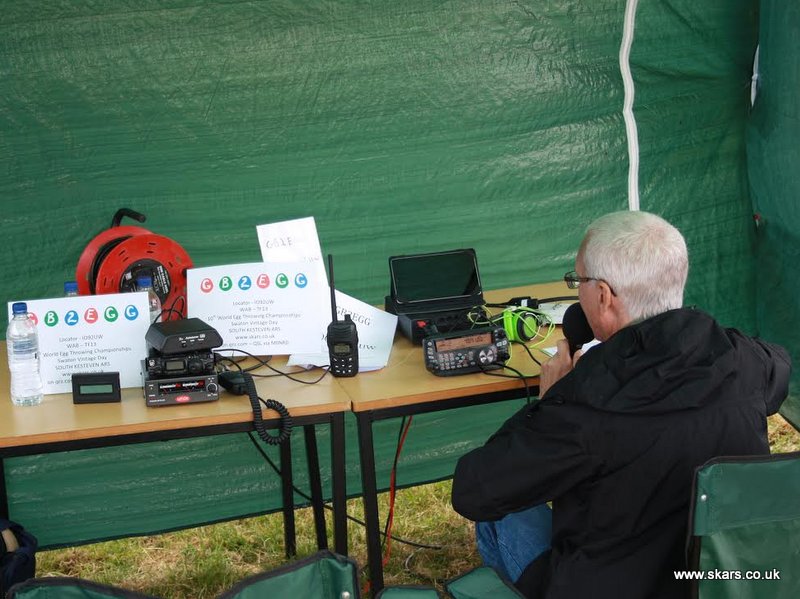 Operating conditions were testing, due to the weather and band conditions following solar activity as well as the close proximity to the egg throwing arena. The public address system and noise of the crowd made hearing contacts difficult, also attempting to run at 100w proved problematic for the small generator supplied by Sean, so we ended up running on leisure batteries.

GB2EGG also suffered a setback when the gazebo (also supplied by Sean) self destructed for the second time in the strong gusty wind and Nigel Booth, the NoV holder for the event call sign, decided that he had enough and left not wanting to jeopardise his equipment. Unable to continue under the event call sign we continued for a while using Stewart’s Yaesu FT897, this time using the Club Call Sign MX0SKR, commandeering a vacant adjacent tent supplied by Butler Electrics who were the official sponsors of the Egg Throwing
Championship. 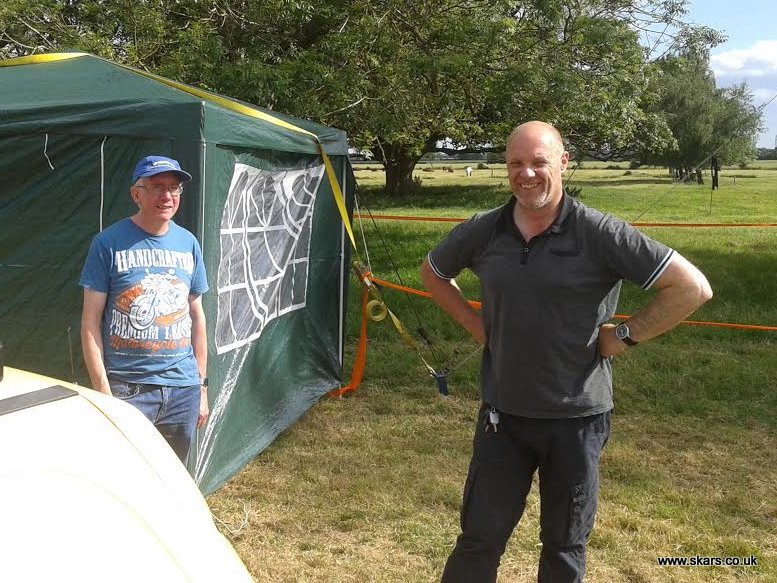 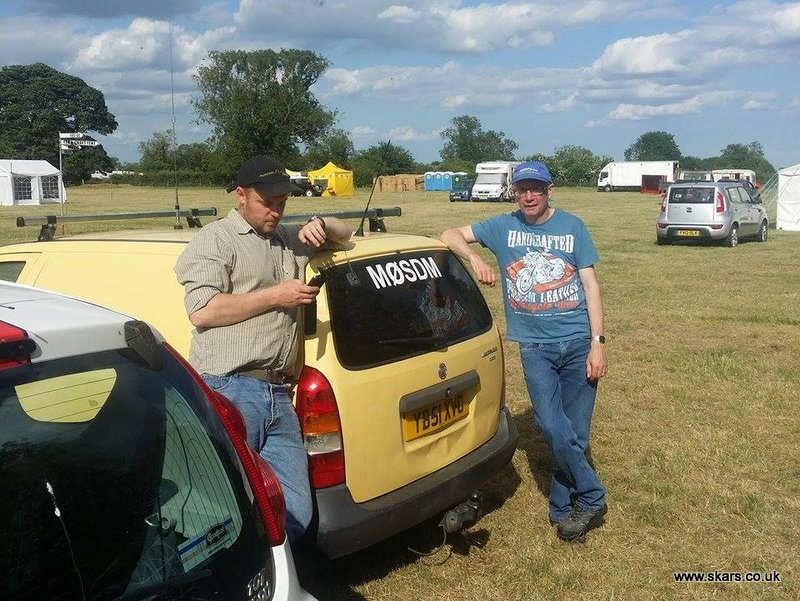 For mission background please visit this page and Andrew Garratt’s Radio Antics blog. WELL WE DID IT! In addition to the GB2EGG Special Event Station, Andrew Garratt and South Kesteven ARS sent an egg into ‘space’ – well in to the Stratosphere at least reaching a maximum altitude of 31km, nearly 20 miles or over 100,000 feet! The egg then returned to Earth, splashing down in the North Sea and is currently missing in action condition unknown and hopefully will wash up on a beach Anyone finding MADHEN EGGSPLORER-1 please contact 07969 062859 (+447969 062859 outside the UK) or email eggsplorer1@andrewgarratt.co.uk

The flight path can be seen above. Unfortunately like all pioneering space missions we suffered a technical hitch and the on board camera system failed shortly after take off so pictures weren’t received back at mission control. As you can see the system was working before launch as the spacecraft lay in it’s pre-launch position.

This was the partial image received after launch as it sailed into the sky, suspended beneath the parachute.

Despite the failure of the camera, the backup system sent telemetry data showing the altitude, position and temperature and pressure during the flight, which was tracked by numerous radio receivers and shown on the UKHAS tracking website.

The launch took place at the start of the show as there were some issues with getting CAA approval because the sky was very busy on the day including the last remaining Vulcan Bomber VH-558 making its farewell flight in the area, cue jokes about the Vulcan getting scrambled… but approval was given for a morning flight, not ideal for the organisers but we were still a spectacle for the handful who were there early. 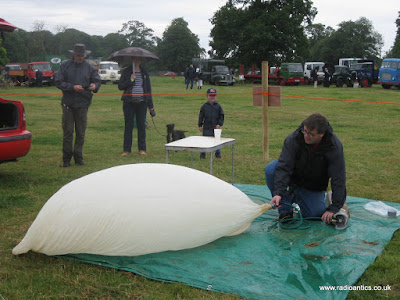 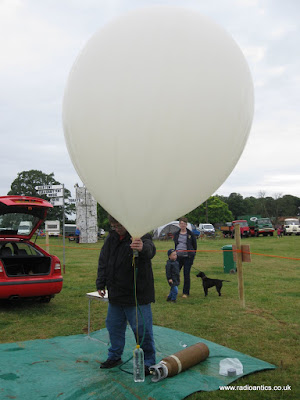 Checking the lift using a bottle of water 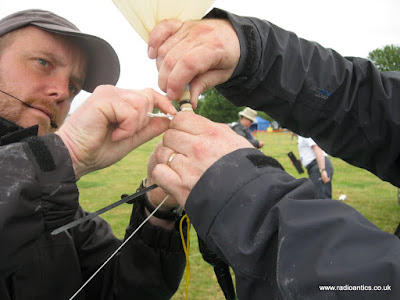 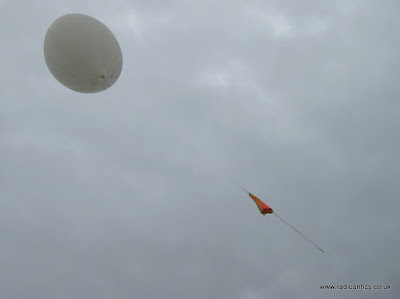 A strong gusty wind was blowing at launch time 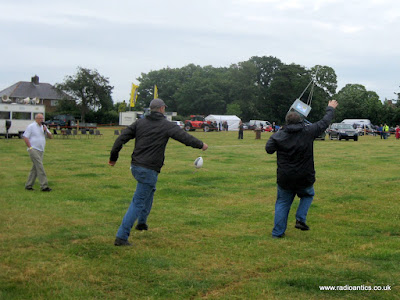 After a worryingly slow ascent at launch, the plucky EGGDX climbed into the jet stream at approximately 6km up and was flying toward Denmark at approximately 120km/h till it hit bad weather and was downed into the sea after a 400km journey, you can the flight path compared to MADHEN Eggsplorer-1

It was a eggscellent day, and plans are already underway for Eggsplorer-2 next year…
The flight was featured on the BBC News website here You can follow developments on twitter @eggsplorer1